December 11, 2012- The New Year is around the corner, and the holiday preparations are in full swing. Some of us are thinking about writing ‘Ye Ole Christmas Letter ‘ for our family and friends. Many of you have considered holiday letters to be boring or perhaps an opportunity for a family to do the bragging dance?  I feel that it is a place to put the year-end highlights of a family, good or bad. Lay it all on a slate for the New Year to wipe it clean and an opportunity to begin a new.

January 11, 2012- My aunt Ramona dies at age 84. She was the oldest sister out of nine siblings, and we will miss her.  I have lots of memories of my aunt, but what I remember most about her is that she was a no-nonsense type of lady and an awesome cook, very well-loved.

February 3, 2012-When family pays you a visit that you have not seen in a while? You will want to cherish every moment, spend time catching up and comment on how the years have passed. That is just what we did. Our cousins, Lillian, Adam, their kids and my sister-in-law, Doreen spend time with us. Time remembered, and we look forward to another visit in the future. Time spent was precious!

February 6, 2012-The Chinese New Year parade was underway, and we had the opportunity to be part of it. John was a candidate running for Florida State House Representative, District 43. He was doing his thing interacting with the crowd of spectators as we witnessed a spectacular event. That was incredible!

Cousin Joey does Karaoke at the Rising Star

March 18, 2012-Did you ever go out with family members and discover that there was more to them than meets the eye? Yep, our cousin Joey showed us.  He had no fear of getting up on stage and doing a love song for his love, Donna. Lovely romantic to say the least. We had a blast with them that night.

Our daughter Cary celebrates her 30th birthday with a Masquerade party.

April 16, 2012-Our daughter turned 30 this year, and her party was a great success. Preparing for the event was a memorable experience, definitely challenging. Her theme was to be a masquerade; it was a new adventure for me. She asked for my assistance with the decorations and in making some of the masks for the event. I designed the mask my daughter is wearing. Can you believe it?  Have I never designed masquerade masks? Truthfully, I have never ventured into making them. My life lesson from the experience? Never doubt your creativity, explore it and you will be pleasantly surprised. Food for thought. 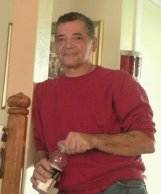 May 31, 2012-When news reaches your ears of loved ones that passed.  Ask yourself, why? The unfairness of it!  Jim left behind his devoted wife, Sylvia of thirty-eight years. They had three sons and three grandchildren that will miss him immensely. He lost his battle with lung disease while waiting for a double lung transplant. We love you, Jim!

June 2, 2012-The day of Jim’s funeral. It was a somber day for all of us. The family that we had not seen in years attended. Co-workers honored Jim by having a bus outside the funeral home with his name and employee number. He drove a bus for a living. Cousins that had not seen each other since childhood got to spend time together unfortunately in a sad time.

July 4, 2012-Candidate John Cortes participates in the 4th of July parade in Celebration, Florida. He was well received and time well spent.

August 14, 2012-During the primaries, reliable sources reported that John received the majority vote accredited to his opponent.

September 8, 2012-Obama visits the Kissimmee Civic Center in Kissimmee, Florida. We had the opportunity to see the President. I can not describe the experience, but remembered as a memorable one.

October 28, 2012-Johns father, Anibal is admitted to the hospital due to possible mini stroke, diagnosed with blockage of his carotid and Cancer in one of his lungs.

November 4, the 2012-My mother moves in with us. My father-in-law discharged on November 20th in time for the Thanksgiving holiday. When you think back on things, you realize family is most important! Not the things that you found annoying at the time.  If, how you imagined it in your head, was not the reality? Remind yourself to count your blessings! You were surrounded by those you love. Most important!

December 14, 2012-Our friend Don reached a  milestone this year, the big 60. We celebrated with him and his wife, Robin at Manny’s Chop-House Restaurant.

Phantom age 16 when she passed away two years ago.

December 20, 2012-I celebrated my 54th birthday. My husband suggested that we visit the pound today. A few weeks ago I said I  would adopt another cat only if I happen to find a cat with the same markings as my Phantom. She passed away two years ago. Can you believe that I found a cat that resembled Phantom? She is six months old, and her name is Random. I decided to keep her name as is due to its uniqueness. Later in the evening, our friends came over for a bit. My husband had a cake for me, and they sang Happy Birthday. It is funny how things strike you when they occur, like a flashback to your childhood. The birthday song was sung to us by our parents on every birthday growing up. One of my best memories.

Caridad, Esther(mom) and my brother, Carlos

December 21, 2012-My oldest brother, Carlos is in Florida visiting with his wife, Rosita. I visited him today along with our mother. It was a beautiful day!

There you have it, the highlights of our year. From my family to yours have a very Happy Holiday and may lots of blessings come your way in the New Year. God Bless!

Extreme sadness?  Where is its core?  Where does it stem?  I would like to pluck it out like a pimple ready to burst! It is gross but true.

The intensity saw just is. It is part of the human condition; perhaps it is a piece of one’s soul that is hidden within, laying dormant for an opportunity to immerse and make itself known for all to witness.

A situation or someone pisses you off, and there it is rearing its ugly head.

Just know that no matter what?

You are in control, decide, make a move and not allow it to take over.

Alternatively, it will destroy you in the end.

To be fair, you must allow the person to answer, reply, react, acknowledge, reciprocate.

You must avoid stretching the truth.